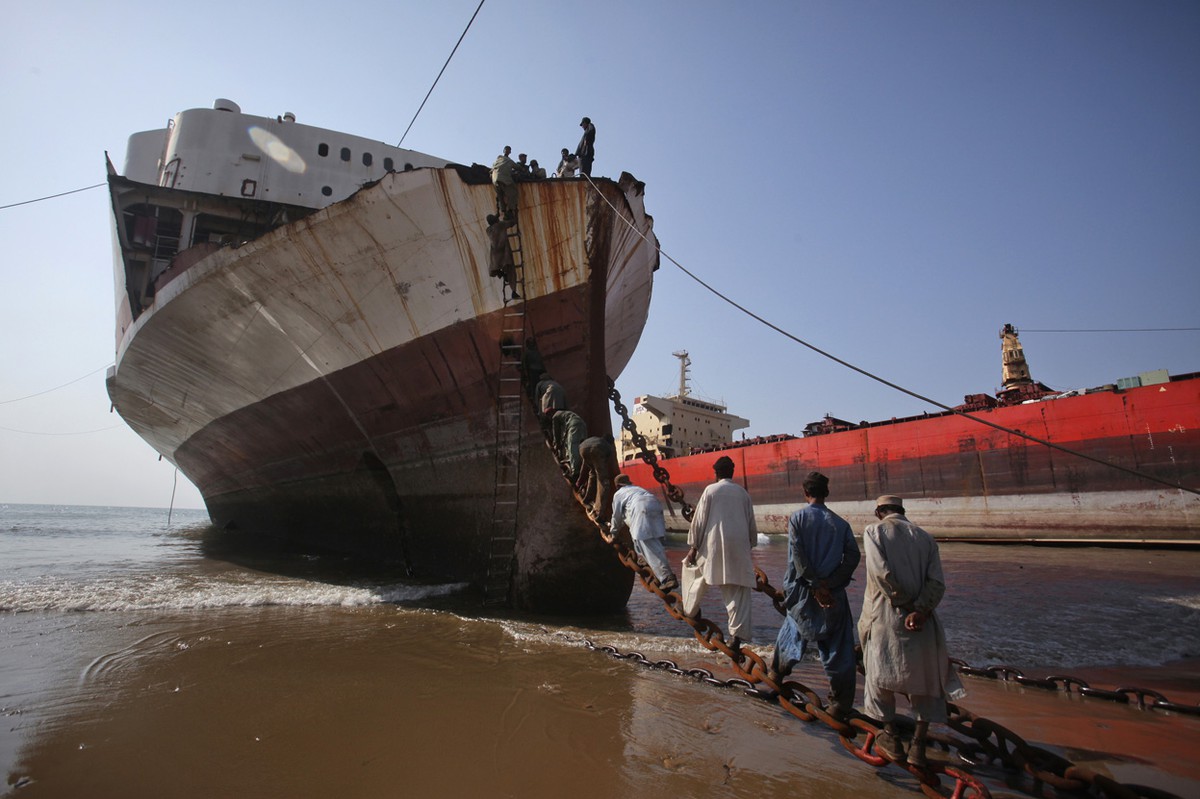 Modern steel-hulled ships are designed to withstand several decades at sea before requiring costly repairs. More than 90% of the world’s ocean-going container ships end up on the shores of India, Pakistan, Indonesia, or Bangladesh after their useful lives are over, where labor is cheap, steel demand is high, and environmental regulations are lax.

The ships are driven right up to the beachfront lots set aside for shipbreaking, where they are battered with hammer and blowtorch until every useable material is stripped away and sold or recycled. The task is extremely tough, and low-wage workers are particularly vulnerable because to hazardous working conditions and exposure to hazardous materials such as asbestos and heavy metals.

For years, environmental groups have been raising concerns about the shipyards’ continuous leakage of chemicals into the environment. Images from these yards captured over the years have been gathered here.

1. On July 10, 2012, a Pakistani worker pulls on a cable that would be connected to a strong chain that will be used to peel away a slab of a beached vessel’s outer framework in one of the 127 ship-breaking plots in Gaddani, Pakistan.

2. On November 25, 2011, a laborer at the Gaddani shipbreaking yard in Pakistan uses a gas blow torch to remove ship pieces into scrap metal.

4. A laborer climbs a ladder held by others, while working onboard a ship, separating it into scrap metal at Gaddani ship-breaking yard on November 24, 2011

5. At low tide on December 21, 2006, an Indian woman moves metal trash on a muddy shoreline in Mumbai.

6. On November 25, 2011, laborers pull an iron rope before separating a piece of a ship into scrap metal at the Gaddani shipbreaking yard.

7. On November 25, 2011, workers at the Gaddani shipbreaking yard transport supplies to a ship using an improvised cable cart in order to divide it into scrap metal.

8. Pakistani shipyard workers remove oil barrels from inside the hull of a vessel beached and being destroyed at one of the 127 ship-breaking plots at Gaddani in this photo taken on July 11, 2012.

9. A Pakistani shipyard worker pulls on a wire attached to a motor that will assist peel away part of the outer structure of a beached vessel being destroyed in one of the 127 ship-breaking plots in Gaddani, Pakistan, in this photo taken on July 10, 2012.

11. On August 19, 2009, workers at a ship breaking yard in Chittagong, Bangladesh, can be seen through a cut section of a ship. Bangladesh relies on shipbreaking to meet its domestic steel needs.

12. On November 22, 2014, workers climb into India’s first aircraft carrier, the INS Vikrant, to dismantle it at a ship-breaking yard in Mumbai, India. The legendary navy warship, which was purchased from Britain in 1957 and decommissioned in 1997, played a significant part during the 1971 India-Pakistan war.

Related Article: How Many Cruise Ships Scrapped in 2021, Here is the List

13. On July 16, 2013, workers at a ship-breaking yard in Chittagong, Bangladesh, enjoy a cigarette during a break.

14. On November 24, 2011, laborers stand on an improvised cable carriage that transports them onto a ship to be separated into scrap metal at Gaddani ship-breaking yard.

15. On July 9, 2012, a shipyard worker climbs down from the metal carcass of a ship at the end of his shift at one of Gaddani’s 127 ship-breaking plots.

17. Workers rest after work at a ship breaking yard in Chittagong, Bangladesh, on August 19, 2009.

18. On July 10, 2012, shipyard workers struggle to dismantle the front end of a cargo vessel that had been beached at one of Gaddani’s ship-breaking plots.

19. On November 24, 2011, laborers at the Gaddani shipbreaking yard in Pakistan climb up an iron chain and ladder to dismantle a ship for scrap metal.

20. On July 24, 2008, shipbreakers in the port city of Chittagong, Bangladesh, move barrels of oil to shore from a ship being dismantled for scrap.

21. On April 19, 2009, the skeletal remains of a ship were discovered at a shipbreaking yard at Shitakundo, Bangladesh, some 16 kilometers from Chittagong.

22. On July 10, 2012, a Pakistani shipyard worker climbs an anchor chain securing a vessel beached and being destroyed at one of Gaddani’s ship-breaking plots.

Related Article: 12 unseen photos and story of the world no3 ship-graveyard 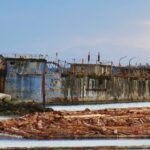 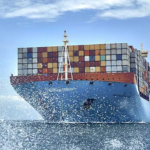