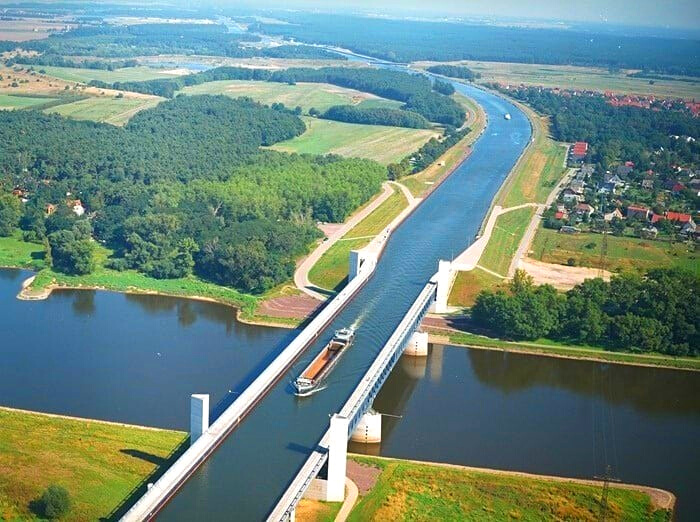 Today we’re going to look at perhaps the most expensive and longest navigable aqueduct in the world, the “Magdeburg” water bridge in Germany.

The 202 miles long Mittelland canal and the 35 miles long Elbe Havel canal. Beneath the water bridge is the river Elbe a vital transport hub for commercial ships in western Germany, as well as central Europe.

In the past canal boats, barges or narrowboats from the middle of the canal looking to reach the Elbe Habel canal had to take a seven and a half-mile detour. Firstly they would need to get to the rotten sea boat lift in order to descend into the Elbe.

Then sail down the river towards the Negrifer lock in order to reach the Elbe Havel canal. But even after all that there were still potential problems. The river Elbe occasionally had a low water level that prevented heavier narrowboats from crossing. Therefore, they would have to remove the heavy cargo before making the crossing.

All of which makes the journey tiring for the crew and time-consuming. The Magdeburg water bridge is 3012 feet long with 2264 feet of the bridge being overland and 748 feet crossing the river. It’s considered the longest navigable aqueduct in the world. The bridge has even appeared in films such as 2011’s Hannah.

Construction of the bridge officially got underway in 1998. The project had been bouncing around the minds of Germany’s authority since 1919, by the 1930s construction on the bridge began.

However soon the country was in the midst of world war ii. So the bridge’s creation was put on hold in 1942. After the war, Germany was split into east and west, due to this the bridge’s creation was shelved indefinitely. Yet once the Berlin wall fell Germany was reunited into one country in 1990. In response, the authorities began looking at transport links to help knit the two former areas together. So the Magdeburg water bridge was suggested and soon plans to create.

Once again were underway there was also an idea to extend the Alba Havel canal. However environmental groups heavily opposed the idea during 1997. The contractor teams of DSD Dillinger Stahlbaugh and Billfinger Berger were chosen. At the time the project was believed to have a cost of 210 million German marks, which is around 128 million dollars and just like most building projects the estimate was much less than the actual cost.

For the construction, around 24 000 tons of steel was required that’s more than the weight of two Eiffel towers at 10 100 tons each. It also needed 68 000 cubic meters of concrete for the perspective that’s nearly two and a half times more than the water held in the Lincoln Memorial reflecting pool with nearly 26 000 cubic meters. By 2003 the water bridge was open for use at 112 feet wide and a depth of 14 feet.

The bridge now allowed barge captains to stack up their vessel with cargo weighing up to 1 350 tons. That’s around 96 times the weight a large truck can haul. Previously the ship’s traveling was limited to 800 tons. In 2002 4 million tons of goods were shipped along the east-west shipping route back in 2003 they were expected to reach 7 million tons by 2015.

On the top of allowing barges and narrowboats across cyclists and pedestrians can also make the trip across the aqueduct but it hasn’t all been smooth sailing. Shortly after the opening one of the locks reportedly snapped and flooded the bank in nearby street but the Magdeburg water bridge wasn’t affected. It could still work just fine. 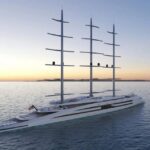 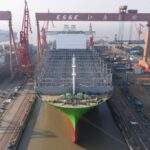