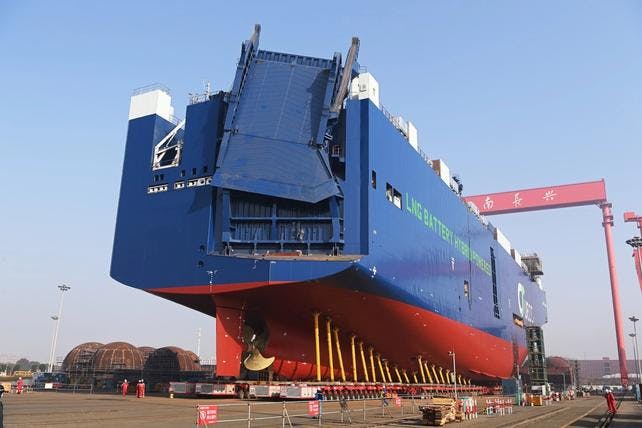 On December 28, 2021, the launching ceremony was placed at Jiangnan Shipyard in Shanghai, which is part of China State Shipbuilding Corporation (CSSC). The keel-laying ceremony for hull number H2665 took place approximately seven months prior to the vessel’s launch.

It comes after the recent completion of the first new-build, named “Auto Advance”. In the first half of this year, the second and third vessels will be delivered.

“We are rapidly building up our low-emission fleet to become the leading eco-friendly shortsea carrier in Europe through the addition of these newbuilds that will, alongside the use of alternative fuels on our existing vessels, drastically reduce UECC’s environmental footprint,” Glenn Edvardsen, UECC CEO, said.

Edvardsen further praised Jiangnan Shipyard’s “monumental efforts” in overcoming logistical supply chain and human capacity challenges, which were mostly caused by the Covid-19 outbreak, to keep the newbuilding program on track with the latest vessel launch.

“The first of these … newbuilds is already in commercial operation and UECC’s ambition to take our fleet to the next level of environmental performance by mid-2022 remains firmly on track thanks to the yard’s adaptability, expertise and productivity,” Edvardsen added.

The second of the newbuilds, which was launched at the yard last summer, is now in the final stages of construction, and when all three are delivered, UECC will have a total of five environmentally friendly PCTCs in its owned fleet of nine vessels, including two dual-fuel LNG units that have been in service for the past five years.

On the latest new builds, the utilization of battery hybrid technology combined with a dual-fuel solution will enable these vessels to meet the IMO’s aim of reducing carbon intensity by 40% by 2030 compared to 2008 levels.