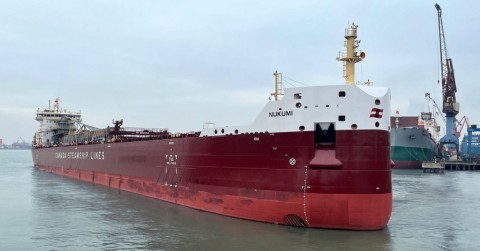 Canada’s first diesel-electric ‘laker’ has left China on its way to Halifax, where it will begin operations for Canada Steamship Lines and Windsor Salt, a Quebec-based salt mining firm.

Chengxi Shipyard in Jiangyin, China, built the state-of-the-art self-unloading ship Nukumi, which has a deadweight of 26,000 metric tons.

The vessel has a unique hull design, quieter machinery, a single point of loading system, and a shuttle boom, and will provide “a long-term, safe, sustainable, efficient, and reliable shipping solution to the Magdalen Islands region,” where it will load deicing salt at Windsor Salt’s Mines Seleine mine and deliver it to stockpiles across Eastern Canada to help keep roads safe during the winter season.

When compared to existing vessels serving the same salt routes, the vessel’s diesel-electric tier 3 engines and hull design will lead to a 25 percent reduction in GHG emissions and an 80 percent reduction in dangerous air pollutants. It also has a ballast water treatment system to prevent invasive species from being transferred, as well as noise reduction technology to protect North Atlantic right whales and other marine mammals in the Gulf of St. Lawrence.

A fixed, single point of loading system with a single hopper into which the salt is put, as well as a cargo handling system that removes the need for the vessel to shift during loading, will help to increase cargo operations’ safety and efficiency.

The maiden voyage of the M/V Nukumi is planned to last six weeks. 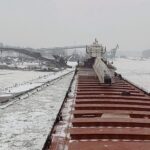 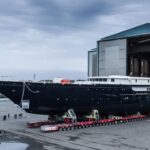