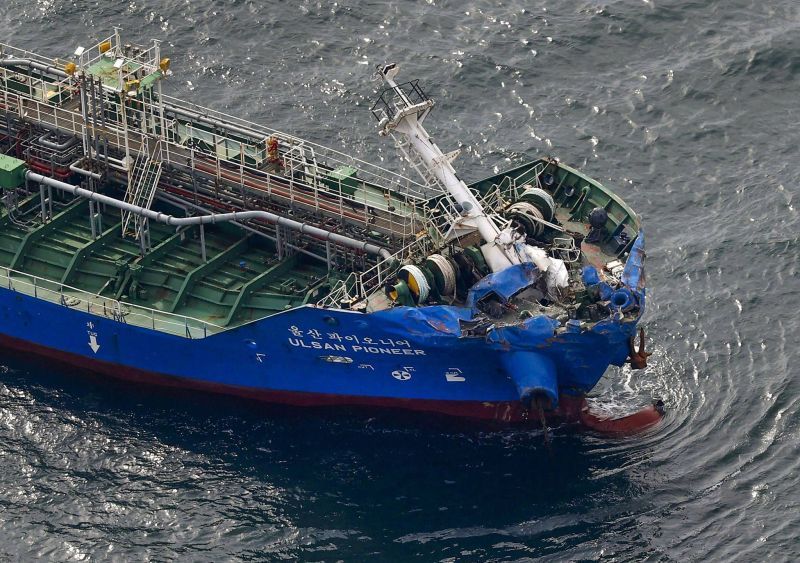 According to NHK, The whereabouts of three Japanese cargo ships that were overturned due to a collision between a Japanese cargo ship and a foreign-registered ship in the Seto Inland Sea off the coast of Ehime Prefecture on the late 27th are unknown.
The Japan Coast Guard is conducting searches such as diving a special rescue team on board.

Around 11:55 on the 27th, a cargo ship “White Tiger” operated by “Prince Kaiun” in Kobe City and a chemical tanker “ULSAN PIONEER” registered in the Marshall Islands near the Kurushima Strait northwest of Imabari City, Ehime Prefecture. It was reported that about 2700 tons had collided.

The cargo ship capsized in the accident and sank approximately 2 hours and 40 minutes later.

9 out of 12 crew members of the cargo ship were rescued,

According to the Imabari Coast Guard, 9 out of 12 crew members of the cargo ship were rescued, but Captain Yasushi Sato (66), 1st engineer Yuki Ogawa (27), 2nd engineer The whereabouts of Takahiro Uehata (22) are unknown.

Also, according to the fire department, all nine rescued were taken to a hospital in the city, and there is no difference in their lives. There were 13 Korean and Myanmar registered passengers on the “ULSAN PIONEER“, but the ship was not sunk and no one was injured.

According to the Japan Coast Guard, “White Tiger” was scheduled to leave Kobe Port at 4:30 pm on the 27th and arrive at Kyoda Port in Fukuoka Prefecture at 5:30 am on the 28th.

At the scene, the Japan Coast Guard’s special rescue team began diving into the sunk ship before noon on the 28th when the tide became weak, and the Japan Coast Guard issued a patrol boat to search for three people whose whereabouts were unknown. I’m hitting.
According to the websites of the shipping companies that own it, “White Tiger” was a cargo ship of Shunkou last year, with a total length of about 170 meters, a width of 26 meters, and a gross tonnage of 11,454 tons.

“Prince Shipping,” which operated “White Tiger,” said, “We are currently checking detailed information on the accident.”
The Kurushima Strait is known as one of the “three major tides in Japan” along with the Naruto Strait between Shikoku and Awaji Island and the Kanmon Strait between Honshu and Kyushu. It is a special strait.

Approximately 400 ships come and go each day, and the surrounding area is a sea area with many accidents, which is considered to be a “difficult place for maritime traffic.”

In this accident, the Japan Transport Safety Board has appointed three accident investigators and will dispatch them to the site to investigate the cause.

The Maritime Self-Defense Force dispatched the submarine rescue ship “Chiyoda” to the site sea area in response to a disaster dispatch request from the 6th Regional Coast Guard Headquarters.

The submarine rescue ship is equipped with a “rescue boat” that can carry out rescue operations even in high water pressure, in case a missing cargo ship crew is found.

“Chiyoda” is aiming for the site sea area by leaving the Maritime Self-Defense Force Yokosuka base after 7:00 am on the 28th.

South Korea’s “Hun-A Shipping”, which was operating “ULSAN PIONEER” that collided with a Japanese cargo ship in the Seto Inland Sea off the coast of Ehime Prefecture, told NHK that “we are in close contact with the people concerned for quick convergence and response. We will actively cooperate with the rescue activities by the Maritime Security Agency through the local agency and will sincerely work on the investigation. ”

According to the company’s explanation, this ship was heading for Osaka Port at the time of the accident, and a total of 13 people, including 8 Koreans and 5 Myanmar people, were on board.

According to the website of Hung A Shipping, the company was established in 1961, operates container ships and chemical tankers between Japan and South Korea, and is currently expanding its business mainly in Northeast Asia and Southeast Asia. 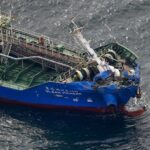