Authorities reported a fire on a cargo ship on Sunday transporting timber off the coast of Sweden’s west coast was still burning after more than 24 hours.

The Swedish Civil Contingencies Agency (MSB) stated it had dispatched two helicopters, and that the fire was being fought by a number of other authorities and organizations, including the Coast Guard.

The Swedish Coast Guard continues to douse the burning M/V Almirante Storni with water off the coast of Vinga, near Gothenburg.

According to a Monday report from the Swedish Coast Guard, the fire is still burning with “undiminished strength,” but it is not believed to be expanding and has not spread the ship.

The fire is still being controlled by the Coast Guard’s two largest vessels, the KBV 002 Triton and KBV 001 Poseidon, as well as tugboats and aid from the Sea Rescue Society.

“The ship contains large amounts of fuel and MSB has started preparations to be able to support with resources in case of a potential leak,” the Swedish Civil Contingencies Agency (MSB) said in an update on Sunday.

As the firefighting continues, seventeen crew members are reported to be still on board. The crew members and gasoline tanks are both at the ship’s stern, according to the Coast Guard, while the fire is blazing closer to the bow. 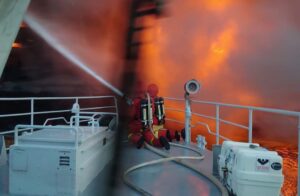 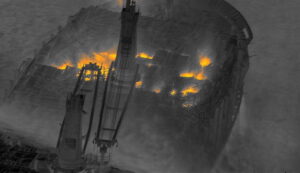