According to NewsFirst, The MV X-Press Pearl container ship’s owners have addressed why it did not dump a leaking container at the Hazira Port in India and the Hamad Port in Qatar. 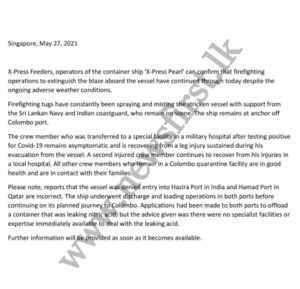 Meanwhile, the Navy, in collaboration with the Marine Environment Protection Authority (MEPA), launched a special operation to reduce the impact on the coast caused by various debris, including containers, washing ashore after falling overboard the fire-damaged ship, and to keep the public safe from coming into contact with potentially hazardous chemical compounds contained in such items.

Sri Lankan navy members remove debris from the MV #XPressPearl #container #ship , which caught fire off #Colombo , on a beach in Ja-Ela pic.twitter.com/iJPbPVDZz8