Royal Caribbean International provided the first information on its highly sought-after new cruise ship, The Icon of the Seas, which has been under development in Finland for over a year. At 250,800 gross tons, the brand new ship is more than five percent bigger in quantity than its Oasis-class and will be the largest cruise vessel in the world.

This cruise vessel, the first of three ships ordered to be built for this class, is currently being constructed by Meyer Turku and scheduled for delivery towards the end of 2023. With 1198 feet in length, it is 10 feet larger than The Wonder of the Seas, which is currently the biggest cruise ship. The brand new Icon of the Seas will be equipped with 2,805 staterooms which will give an occupancy of 5,610 people, which is more than 100 people smaller than Wonder of the Seas. With a greater emphasis on families, the new ship will feature additional third and fourth berths providing a total capacity of 7,800. The crew will be 2,350. 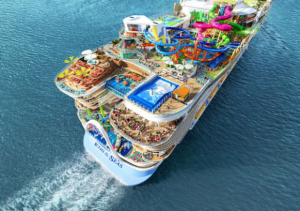 It is promoted as an extension and improvement of the company’s most popular services for customers. It will offer eight distinct neighborhoods, or zones, that span entertainment, sports and eating and recreation. One of the features that were revealed in the initial announcement is the biggest water park at sea, with six world-record-breaking slides along with seven pools. The largest of these is in the world, a cantilevered pool to the top of the superstructure as well as a designated space for adults.

The accommodation will consist of a variety of family-friendly staterooms as well as rooms for families. They also have their biggest enclave area suites as well as a dedicated lounge and restaurant.

Passengers can also choose from over 40 bar, dining, and nightlife choices. The ship will feature the popular promenade with shops, bars and eateries and the outside Central Park garden with live plants. The Aqua Theater is relocated at the stern of the Oasis class and is now a large glass dome on the top of the superstructure. The AquaDome will be a serene space during the day and offer dining establishments during the night. 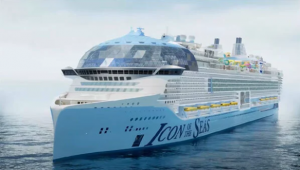 “With each new ship, we raise the bar in the travel industry while enhancing what our guests know and love,” said Jason Liberty, president and CEO of Royal Caribbean Group. “From the moment they step on board, every experience is specifically designed to give them the best vacation anywhere on land and at sea. With Icon of the Seas, we’ve taken this to a new level and made the ultimate family vacation.”

The launch of the Icon class will also signify firsts, and will be the next step in Royal Caribbean’s efforts to improve the environment-friendly performance of its vessels. Its Icon of the Seas will be the first cruise line’s vessel to be powered by liquefied gas (LNG), which will join Carnival Corporation, Disney, and MSC among the largest cruise lines, as well as Havila and Ponant, which have built LNG-powered cruise vessels. Royal Caribbean Group is also developing an LNG-powered ship to support its premium brand Silversea Cruises. Icon of the Seas Icon of the Seas will also be the first Royal Caribbean vessel to use fuel cells, as well as develop other technologies, including an electrical connection to the shore and energy recovery from waste heat.