A Washington State Ferries vessel sustained serious damage during an allision on the dock Thursday morning. The vessel exploded its plate on the bow above the waterline.

According to WSF, the ferry Cathlamet had a “hard landing” at the Fauntleroy terminal in West Seattle, causing damage to the vessel. It was the U.S. Coast Guard clarified that the ferry struck a piling(dolphin) when it was approaching the terminal. Photos indicate that the dolphin also suffered damage. 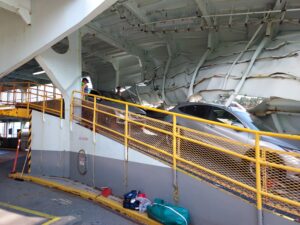 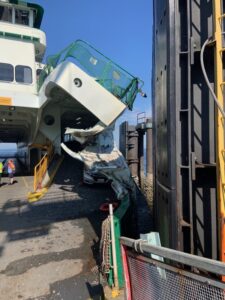 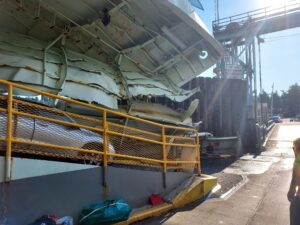 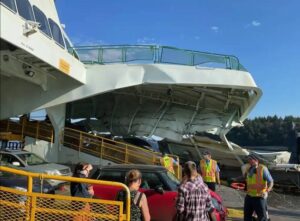 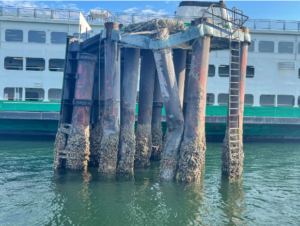 Images from the scene show extensive damage to one dock-facing side that is part of the double-ended ferry. (The damaged area is at the port bow on the journey to the ferry terminal because it is double-ended.) The upper deck of the promenade was twisted and crumpled at an angle. A portion of parts of the frame buckled enough to touch two cars on the upper car deck.

No incidents, injuries, or flooding has been confirmed. The terminal has been temporarily shut, and service will be suspended until further notice. the traffic heading to Vashon Island is being diverted south via the Point Defiance route.

“We were just going like normal & like right before we were docking, we just hit a huge wood pylon out there & it was a huge crash & it shook the entire boat & sort of like shifted a lot of people’s cars too inside the boat,” said Oskar Weiss, passenger. #fox13 #ferrycrash #pnw pic.twitter.com/xgzP9TmpFX

After the incident, the vessel berthed in safety and released all passengers with two vehicles.

The U.S. Coast Guard is in the area and conducting an investigation, and the vessel will be released for transit to another place once it is granted permission.