Australian photographer Tim Samuel captured a unique photograph during free diving in The Pass in Byron Bay, located on the northern coastline in New South Wales. The stunning images show the bizarre scene of a fish trapped inside the jellyfish. 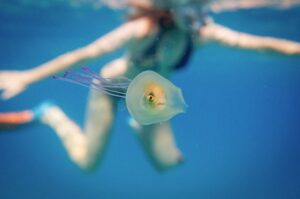 According to Samuel, The most remarkable thing is that the trapped fish could control the jellyfish moving direction like a twisted version of a living, breathing submarine. 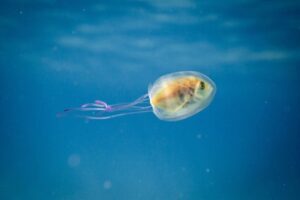 The images appear to capture the poor little fish’s expression of extreme fear (or perhaps confusion?) while he is imprisoned in his jelly-prison. Samuel adds that in all his years spent in the sea as a photographer for more than five years and a surfing teacher before that, he has never witnessed anything like this. 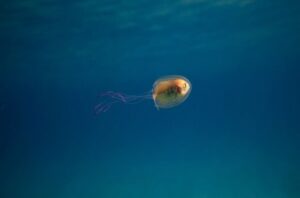 Despite the fish’s frightened expression, Ian Tibbetts, an Associate Professor at the University of Queensland, explained to Australian Geographic that “it’s difficult to tell whether disaster has just struck, or whether the fish is happy to be in there.” Jellyfish stingers attract certain species of fish. Therefore, it could be that this fish may have missed the mark. In any case, Samuel’s pictures certainly deserve the title of most bizarre image that day.