Humans, nature never fails to surprise us. You might see something you never expected to see. It will be a once-in-a-lifetime chance. For example, you may be on a sightseeing tour off the coast when you notice a gigantic humpback whale breaching the water right next to your boat. You must have felt as if you had won the lotto. Incredible!

This does happen with photographer Douglas Craft. He captured the breathtaking moments when he was on a whale-watching boat in the Californian waters on Monterey Bay.

The massive humpback whale was seen leaping out of the water adjacent to a fishing boat. It was directly behind the fisherman! 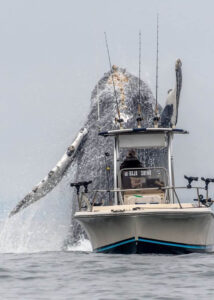 Douglas photographed the massive marine creature via the porthole of his boat. He was surprised for a few seconds by the scene, but he quickly took out his camera and captured it. Fortunately, his filming angle allowed him to acquire a better and more detailed look of the whale. The beast made the fishing boat appear exceedingly little in comparison.

“I went below deck to shoot from a porthole close to the waterline. That’s what gives this amazing perspective of looking up at the whale,” he told a news agency. 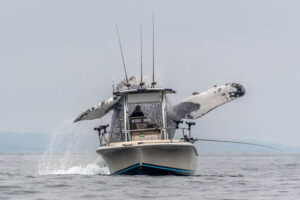 When the photographers posted photographs of the breaching enormous humpback whale on his social media platforms, they quickly went viral. People are “wowing” by what Douglas captured on his camera. It’s most likely a miracle!

Douglas was also assisted by Kate Cummings, a whale watcher who managed to film the whale exploding out of the water. “It was fun capturing this video. The whale had already breached multiple times much further away from the fisherman. But sometimes when whales breach multiple times, they’re also heading a specific direction when they’re underwater building momentum for the next breach,” Kate revealed to the media.

You can watch the video below!