Although a lot of terrible events happen around the globe There is always something positive that happens. This is the heartwarming tale of oil rig workers who saved a dog that was stranded after they found him in the ocean, which was more than 130 miles away from the coasts of Thailand. 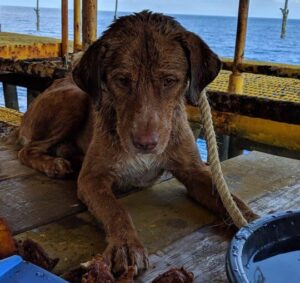 Employees of the oil platform were shocked by a dog swimming near the drilling station. One of the workers, Vitisak Payalaw, quickly grabbed his camera and recorded the scene he witnessed. Others were trying to come up with ways to help him, but eventually, they decided to put ropes around him to bring him in. 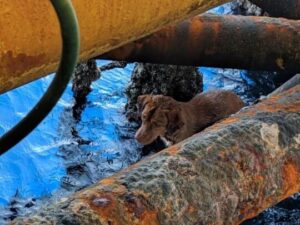 ‘If the waves had been strong, we wouldn’t have seen him. Finally, we decided to tie a rope around his neck and pull him to our site. We had to race against time as wind waves might sweep him away”, Payalaw said.

This dog got an opportunity to relive his life even when it seemed that all hope was gone. According to Payalaw’s report that when the dog was strapped onto the pole, it was exhausted. He was located 130 miles from the beach, which made it almost impossible for him to make it through the night, yet somehow, he managed to survive. 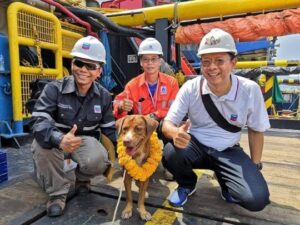 The dog could have fallen into the ocean from the fishing trawler or from a boat where the dog was abused. The dog spent two days on the drilling platform getting water and food from the workers before heading back to the land. He even has a brand new nickname “Boonrod” meaning in Thai refers to “making an offering to God for success in the future.”

When he returned to land and was brought to a vet in Songkhla southern Thailand. They run tests to see whether everything is in order regarding his health. Fortunately, despite being discovered by the sea, this dog was quite healthy. The oil worker claims he’d like to adopt him in the event that no one is willing to take him in.  “I hope to adopt him as a pet,” Vitisak told ViralPress. “I am looking forward to spending many happy years together with him.”