Scuba Diving Magazine has been organizing the Through Your Lens Underwater Photo Contest over the last 16 years. And this year’s contest is a roaring success!
Readers send in their top photos and this year, the judges had record-breaking 2,600 images to select from.

The picture below that was the winner was captured by Evans Baudin of Baja, California in Mexico. It depicts the whale share, with 50 fish strolling in her mouth. 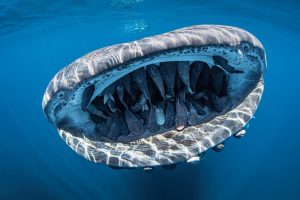 “In June 2020, with a special permit, I went on an expedition to document marine life and the effects of reduced marine traffic due to COVID-19. After two hours in the water with a school of silky sharks near the surface, our boat captain yelled, ‘Whale shark, right behind you!’—a 12-plus-meter female. The surprise was twofold when I discovered about 50 remoras peacefully enjoying a free ride in her mouth!”

Whale sharks, the largest fish on the planet, appeared to be content to offer the fish a ride to wherever they would like to go.
Four categories have winners: Behavior, Macro, Wide Angle, and Compact Camera.

See all the best photos below from the 2,600 images that were entered in this year’s competition; enjoy! 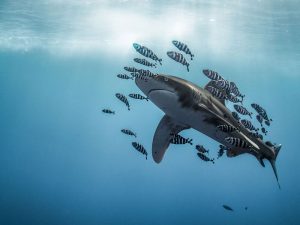 Martina Andres / Scuba Diving magazine, Honorable Mention.
“As a diver, you will never forget your first big shark. I felt eternally grateful to encounter this beautiful oceanic whitetip shark in the Red Sea. As we neared the very last minutes of our dive, she and her ‘entourage’ slowly circled our group, peacefully looking at every single one of us, before they took off into the blue again.” 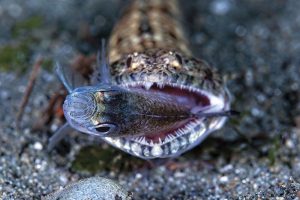 Jerry Arriaga / Scuba Diving magazine, Second Place – Behavior.
“We were diving in the brilliant muck of Ambon Bay. I was swimming under the fishing boats at Laha, one of my favorite dive sites in the area. Out of the corner of my eye I saw the lizardfish suddenly dart off its rock perch. It was really fast, like a torpedo! I quickly swam closer to find the lizardfish with a damselfish in its mouth. I managed to capture this image just before the lizardfish swam off with its tasty meal.” 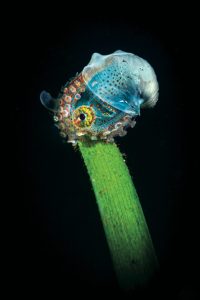 Tobias Friedrich / Scuba Diving magazine, First Place – Compact Camera.
“As a SeaLife camera brand ambassador I always have a DC2000 with me, in addition to my DSLR setup, to take a few side shots. I find it very interesting to see what I can shoot with a very small camera like the SeaLife and how close I can get to the quality of the images I shoot with my DSLR. This juvenile wonderpus was sitting on a palm leaf, a very nice subject to be tested. The dive was done near Anilao, Philippines, with Crystal Blue Resort and the support of photographer Mike Bartick.” 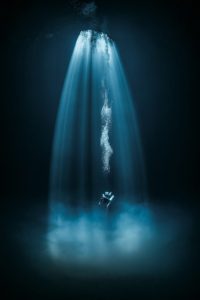 Martin Strmiska / Scuba Diving magazine, First Place – Wide Angle.
“On the surface at the cenote’s entrance, I had no idea what sort of space lay beneath the small pool. Only when I descended and positioned myself outside the area lit up by sun was the dark space revealed. When my eyes adjusted to the darkness, I perceived the huge dimensions of the space. My buddy, hanging above that cloud and lit by sun rays, appeared so small that I spent the whole dive shooting from distance, trying to capture the tiny diver in that huge space.” 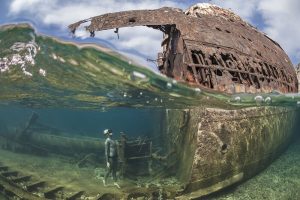 Marc Henauer / Scuba Diving magazine, Second Place – Wide Angle.
“The Olympia shipwreck can be seen in the 1988 Luc Besson movie The Big Blue. It ran aground near shore on Amorgos Island in Greece. The secret of this image lies in the synchronization. To succeed, it took a ray of sunlight to illuminate the underwater landscape, then a wave arrived with the right angle on the dome to have a good view above and below, and finally, the freediver had to hold position facing the wreck. It took a lot of rehearsal.” 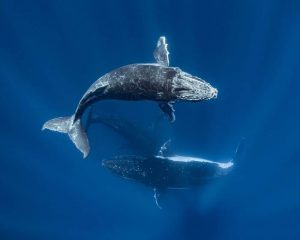 Sean Steiniger / Scuba Diving magazine, Honorable Mention.
“A humpback whale calf sails through the emerald-blue waters of Tonga, closely accompanied by its colossal mother and escort. As the leviathans circle directly beneath me, the calf ascends toward the surface for fresh air. I tuck back my freediving fins and snap the shot. A split second later, momma surfaces to usher her baby away from the bubble-blowing stranger.” 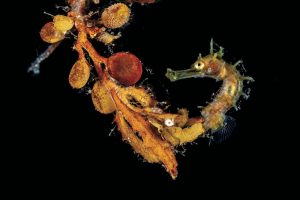 Jeffrey Haines / Scuba Diving magazine, First Place – Macro.
“You never know what you are going to find when you go on a black-water dive. One night it may be tiny larval fish, another a mako or silky shark, but mostly you are searching through the plankton for tiny creatures as you float along with the current over deep water. Persistence and concentration are the keys to success in finding your subject as you drift along. About 45 minutes into my 90-minute dive, I started to spot small clumps of sargassum floating by, always an exciting sight on a black-water dive. I found this seahorse in the third clump I investigated.” 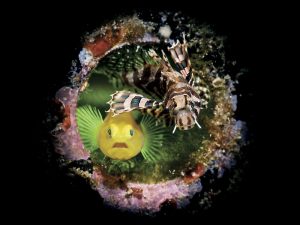 Enrico Somogyi / Scuba Diving magazine, Third Place – Compact Camera.
“While diving in Anilao, the macro capital of the Philippines, my spotter showed me a seemingly empty beer bottle in the sand. But there was something living inside. I started shooting the lemon goby that was living there. After a while, I noticed a shadow in the background, and a few seconds later, I saw the juvenile lionfish coming out. I pushed the shutter right when the goby started to yawn and the lionfish looked in the camera.” 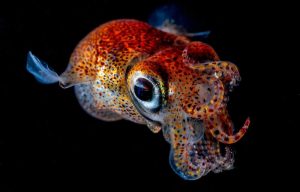 Andrey Shpatak / Scuba Diving magazine, Honorable Mention.
“Sepiola birostrata is one of two species of cuttlefish resident in the northern Sea of Japan. During the day, it hides on the sandy bottom and can be found only by chance. But at night it goes hunting. Despite their small size [around an inch], these cuttlefish are predators, catching shrimps and crabs. There are usually a lot of them in July, above the sandy bottom, at depths from 15 to 40 feet. I managed to meet this beauty during a night dive. Its color was simply gorgeous.” 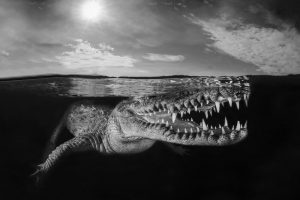 Massimo Giorgetta / Scuba Diving magazine, Honorable Mention.
“In this Cuban archipelago, among the mangroves, lives a small colony of American crocodiles. To make a series of photos I had to go in the water with them for three days, studying the currents, the light and the clarity of the water. Then I waited until the crocodile was in the right position against the backlight. The idea was to have the best contrast between the reflection of the sun and the color of the water.” 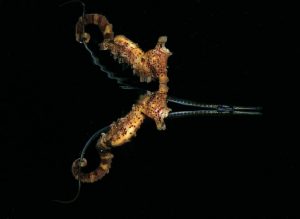 Jules Casey / Scuba Diving magazine, First Place – Behavior.
“Captured during a daytime dive at Blairgowrie Pier in Port Phillip Bay, Australia, this shorthead seahorse was feeding near the surface and freely swimming from one floating piece of weed to the next. I’m not sure if the seahorse mistakenly grabbed hold of the pipefish with its tail, confusing it for a piece of weed, or if this was deliberate. The pipefish immediately struggled to break free from the seahorse’s grip. This interaction lasted only about 10 seconds, which was just enough time to set up the shot.”